Cutievirus' MV3D (https://cutievirus.itch.io/mv3d) allows you to make 3D projects in RPG Maker. From PS1-like maps to 1st person dungeons, there was even someone that turned it into an FPS with it.

Quxios' QSprite (https://quxios.github.io/plugins/QSprite) allows you to use spritesheets on RPG Maker MV's maps with an amazing level of control.
You can set idle, Walk and Dash animations, for all 8 directions. You can set random idle animations to play after some time, and change when one is allowed to play. You can create new poses, and make them play whenever you wish, looping or not. And all that by setting presets, so you can set them for one spritesheet and use the same setting for many with the same number of rows, columns, and position of the sprites to use.

And I made them compatible. Or at least, as much as I could tell from my personal testing.

Unfortunately it is only useable for RPG Maker MV. As far as I know, there is no equivalent to QSprite for MZ yet, whenever I find one I hope to make a compatibility patch for it too.

Plug and Play. But you need to "plug" it properly.

QPlus and QSprite (QSprite needs QPlus to be used) are to be put above MV3D on the plugin manager. Not directly, but above overall.

And all of those should be put above this compatibility patch.

This patch is compatible with MZ3D, the version of MV3D for RPG Maker MZ.

QPlus, and QSprite, originally were not compatible with MZ, as they were created years before it was released and the creator, Quxios, stopped dealing with RPG Maker plugins.

That said, there are people making compatible versions of Quxios' plugins.
The one I am sharing here is a version mostly converted by ImaginaryVillain, but his QPlus has some bugs rendering it still unuseable. As I fixed it I made an issue in ImaginaryVillain's github for so it could be fixed later, including telling how I did it, (https://github.com/ImaginaryVillain/QPlugins), but until they are fixed I shall post my fixed version of his QPlus and his version of QSprite.

Something you need to take in consideration though:

ImaginaryVillain did not adapt the plugin commands from the MV version to MZ's.
Usually the only way to add MV's commands to an MZ project would be to open it in MV. To avoid it, and any possible risk of something being done wrong,  I am also adding there a map containing just an event with an empty MV Plugin Command.
Create a new map, rename this map to that new map's number and overwrite it in the Data folder, and open MZ. Copy it to your MZ events and you can use it not just for QSprite but also any other plugins that may need MV Plugin Commands too.

Besides this,  use this patch exactly the same way you would for MV3D, but with MZ3D in its place.

I'd appreciate if you would mention me in your project's credits, as either "YoraeRasante" or "Vinícius Galiaço"

I have to admit it was made mostly for myself, as I am a fan of QSprite and thing it would be great to use in mv3d, or mz3d as I started a new project in it.

But if it is useful for others, why not share? 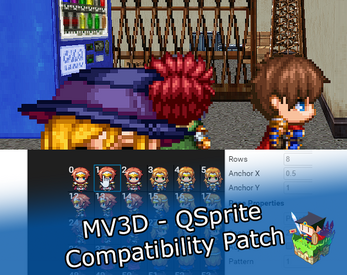