SumRndmDde, also known as SRD, created many great plugins before apparently leaving RPG Maker.
But... Most of them have a small flaw, or something that can be improved.

Character Creator EX, or CCEx, is a character customization plugin for RPG Maker MV. It has a few flaws, but is it is perfectly useful on its own.

Some of these are fixes, other are additions I thought would improve the original.

There are three main fixes done:

For settings of the piece categories, you need to use SRD's Supertools plugin (thus why it is one of CCEx's requirements). Said changes are usually saved in a Json file.
However, the Json file (at first) only saves properties for folders already added to the Json file, meaning that to add more folders and types of pieces you would need to manually edit the Json
This fix makes it so the Json file adds them by itself if you change a category in SuperTools that is not in it yet.

By default, when a normal face is drawn into somewhere it is not a perfect square it is cropped to the sides to fit.
CCEx's custom faces... did not use to. They would stretch (or, well, shrink) to fit the new shape.
This has been fixed, and now they behave just like the normal faces would.

One of the issues CCEx had when that changing the colors of a piece  is that there was no wrap. You could go back and forth to the limit, but it did not circle around.
That is a big problem when the method touch control was added to it was that it only changed the color forward, meaning without looping it would never go back to the previous color options.
This has been fixed. Now colors loop, on both ways. It is not that important for touch control, but that will be explained among the additions.

Speaking of the additions...

One of the additions I find most important (thus being the first mentioned) is being able to set the custom characters to an event per page through comments, instead of being stuck with one custom char, and in only one position, due to only being able to use the event's notebox.

Just like on CCEx itself, using this gives that page the image of that particular custom character in a walking position.

Just like on CCEx itself, using this gives that page the image of that particular custom character, this time on a downed position.

Added for the pages, this one makes that page have no custom character. Not usually needed, unless that event already has a custom char notetag on the notebox.

In addition, you can now use script calls to change the character image during runtime.

Another thing missing from the original CCEx was the option to change the text of the choices when exiting the Character Creation scene. All the rest of the text was changeable, but not those two options to finish and exit the creation scene or cancel and go back to customization.
Something important if, for example, your game is not supposed to be in English.
And extra important because, even if your game is in English, the text of the options at the end was not the normal "Yes" and "No", but "Yes!" and "Nope".

Now, if you choose a color for a piece, change folder/category, then return, the first color choice stays.
For example, you give a character blue hair. Then you give it grey eyes. But you decide to change the shape of the haircut. Now when you return to the hair to change it, it is already selected as blue hair.

As mentioned before, at first you could only go forward when choosing the colors if you were using touch controls.
This plugin changes this, so pressing on the left and right sides of the color selection box will change it back or forth, and in the middle confirmes it. So does canceling, just like with keyboard controls.

CCEx has two extensions also created by SRD, DynamicActorsEX, which makes so equipment changes pieces of the custom characters, and MessageFacesEx, allowing selection of expressions and even changing the expression or even what character's custom face appears mid-text.

However,  there is an issue: Those extensions also need SRD's GameUpgrade. Something I do not use and, even if I used, I cannot be sure would still work when on MZ yet (more on it later).

Thus I created a small plugin to take GameUpgrade's place. It contains only what is needed so it works with SuperTools, CCEx and its extensions, thus it is not a proper substitute for GameUpgrade... but it is enough if you will only use those four plugins.
If you will not use GameUpgrade, put YR_CCEX_Xs_no_GameUpgrade where GameUpgrade would usually be - that is, above SuperTools.
...or you can use the original GameUpgrade if you want.

Originally, the message code \CCReset was supposed to show the original custom face. But instead it only uses the latest emotion face set to it. Now it works properly.
As an addition, now setting the face's  emotion to 0 shows its default face. Before it showed nothing.

That's... that's it, really. At least on the user's part, all they need to do is put this extension under both CCEx, the other extensions to it, and MV3D... and that's it.
You're good to go.

DynamicActorsEX does not cause any problems either, as long as it is properly above this plugin.

Of course, for that to work the custom characters are not re-created at every call like by default, but saved in a small cache, remade when changed, and just called by MV3D from that cache.May be useful for other plugins.

FOSSIL is one of the greatest MZ plugins... because it lets people use MV plugins in MZ.

However, one it does not work on yet is CCEx.

I did my best to make CCEx work in MZ just through this extension, but there are a couple things CCEx asks for that FOSSIL does not add, and that need to be added before CCEx is called.

Thus there is a third file here, CCEx_FOSSIL, which goes under FOSSIL but above CCEx. The closer to FOSSIL (which is supposed to be at the very top of the plugin manager), the better.

And yes, with this it means compatibility with MZ3D too.

Assuming all mentioned plugins will be used:

Don't forget, this s just an extension, so also give credits on your game for the creators of the plugins this extends.

I'm trying to equip from the chest on the map. Please tell me how, in this case, without going to the menu to get dressed thing? In the previous version of the plugin (SRD_CharacterCreator.js) update occurred instantly. Thank you.

This doesn't seem to work... I keep getting an error

Thanks for your work!

Do you have somewhere where we can contact you, like a Discord or something? I get an error message: cannot read property 'name' of undefined. Here is the console log: 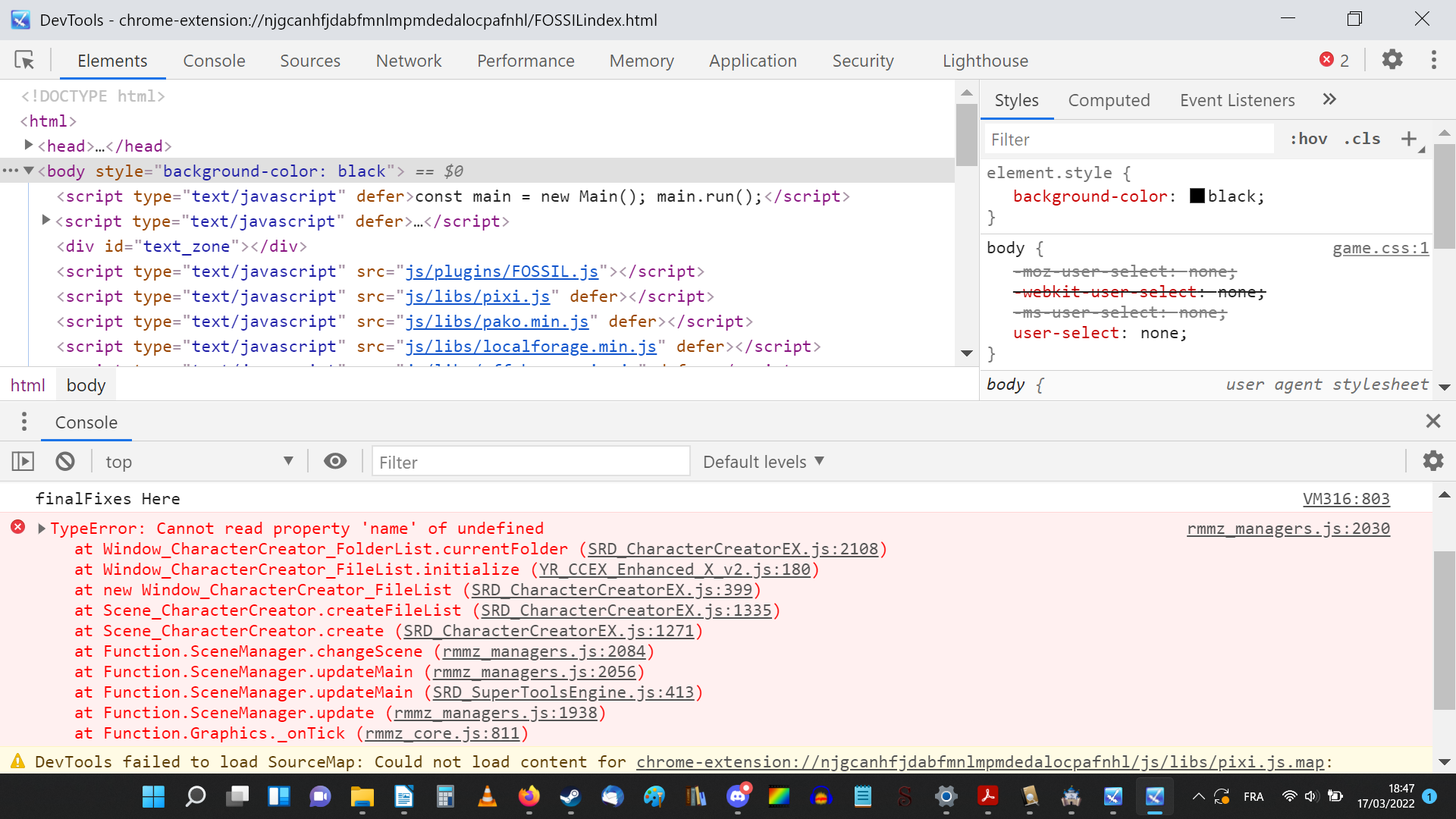 I added all the plugins in the specified order except DynamicActors and MessageFaces, which I didn't add at all.

That's weird, when did the message appear? I tested as much as I could think, but there is always a chance of missing something...
And are you using MV or MZ?

I can see a bit of the console on the bottom, but that's the "Elements" tab, the console is the second one at the top. It is easier to check problems there

The message appeared when I tried to open the editor. I'm using MZ.

By "the editor" do you mean the creation menu or the SuperTools window?

I tried both, and could not reproduce your problem...

Could you show your plugin manager?

And are you using FOSSIL? My plugin assumes you are.

I meant the character creator, sorry for being unclear. I did use FOSSIL. I turned off the VisuStella plugins and still got the error, so it's probably not that. 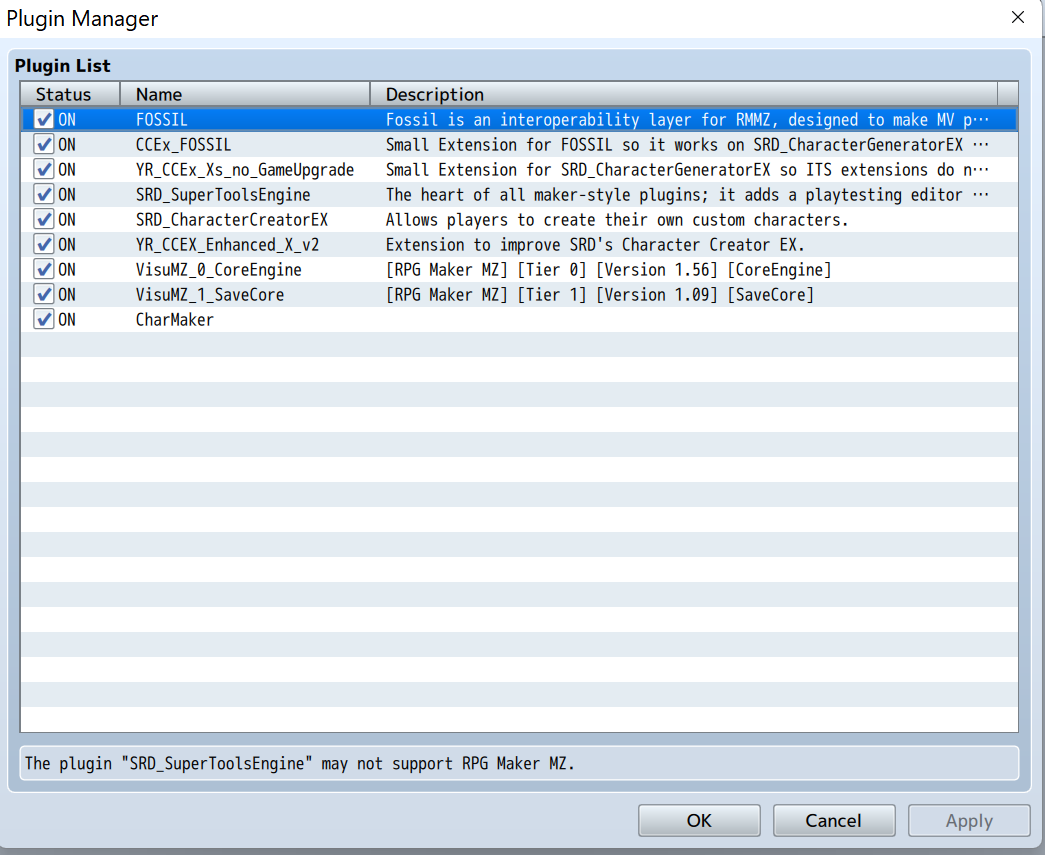 Sorry, but I just used the same plugins as you did - save visustella ones and that charmaker (what is that, by the way?), in the same order, and still got no error...

And without being able to reproduce it, it is hard to fix it.

Whas it in a new game, loading a saved one? What was the plugin command you used? 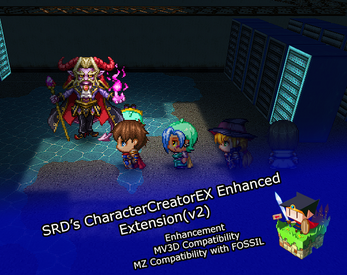